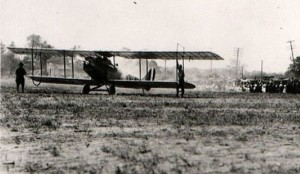 Organized commercial air service began in the United States on May 15, 1918 when the postal service began flying mail between New York and Washington. While this route was not a commercial success, it proved the principle of air mail and resulted in the creation in 1924 of the Postal Services 2680 mile transcontinental air mail route; this served 15 airports spaced about 200 miles apart, using modified World War I DH-4 aircraft. Of the 745 employees, 699 were ground personnel, including the first dispatchers. These dispatchers ensured that an aircraft was available and determined whether or not weather conditions dictated that the mail should be moved by surface instead of by air. They used telephones and low frequency radios to communicate weather and flight information. Pilots received a briefing on weather and airway traffic they might encounter from the dispatcher before departure. With the advent of the teletype circuit and air-ground radio in 1928, the dispatcher was able to disseminate and receive weather reports and transmit this information to aircraft in flight using the 3106 Kilocycle band reserved for air ground communication On November 15th ,1935, an inter-airline air traffic agreement among tile air carriers operating the Chicago Cleveland-Newark airway was approved by Eugene Vidal, the director of the Bureau of Air Commerce. This experimental center was staffed with dispatchers from the respective air carriers.

On June 6, 1937, the Bureau of Air Commerce assumed control of the existing air carrier airway traffic control centers. In effect, the dispatch and air traffic control functions were separated at this time. The first fifteen air traffic controllers were dispatchers from the former airline dispatch facilities. Immediately thereafter, dispatch logs of that time began to show the first ATC delays reflecting the new reality that an external organization was now responsible for air traffic separation.

Dispatchers at the air carriers negotiated altitudes and departure times with the air traffic control centers in an early attempt to control arrivals at busy air terminals. They were also responsible for advising the captain of changing weather conditions and redispatching the flight to another airport if the weather at the destination was below minimums. Position reports from aircraft were relayed from the dispatcher to the airway traffic center via the teletype and phone. The teletypes became so backlogged that a separate “white” circuit was established for reports to and from ATC in 1937.

On May 6, 1935, TWA Flight 6 carrying Senator Cutting of New Mexico to Kansas City crashed killing the Senator and others. The ensuing congressional investigation revealed that the dispatcher knew that Kansas City weather was at or below minimums and that the aircraft had an erratic radio. Additionally, the dispatcher failed to contact the flight and detour it to a suitable airport. This led to increased regulation for aircraft dispatchers in Civil Aeronautics Regulation 27 in November 1937 and amended in May 1938.